You may have noticed that there is a rather ugly (in my view) effort underway to bring the US Federal Reserve under closer political control. The latest attempt to pass a so-called Federal Transparency Act was introduced by Kentucky Congressman Thomas Massie, who said, “Behind closed doors, the Fed crafts monetary policy that will continue to devalue our currency, slow economic growth, and make life harder for the poor and middle class”, a statement which (against stiff opposition) must combine more idiocies in a single sentence than anything else recently spouted by US politicians.

It’s easy to smirk at the partisan piffle from Washington, but before we get too sanctimonious it’s worth recalling that pretty much every one of our recent general elections has had one political party or another wanting to change our existing – and perfectly satisfactory – monetary policy arrangements. I’ve covered this before, but in the past few days I’ve come across a variety of further material which also points in the same direction: when you’ve got an independent, transparent, and inflation-targetting central bank, don’t mess with it.

First, the Money and Banking site had an excellent article, “The Congressional Reserve Board: A Really Bad Idea”, which hoed into the proposed bring-the-Fed-to-heel legislation. And along the way it included this graph (which is an improved, easier-to-read version of a graph in the original academic article), and which handily included New Zealand. 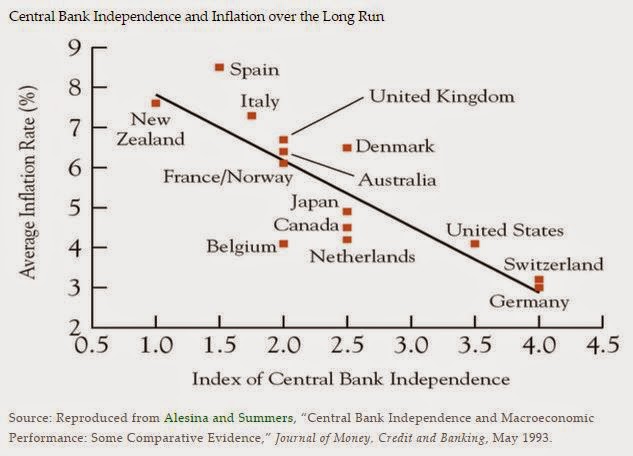 It shows how the world used to be: New Zealand used to have the least independent central bank of any developed economy, and consequently had one of the developed world’s inflation rates. And countries with the most independent central banks had the lowest inflation rates.
The Money & Banking article also included a link to a poll of expert economists on the issue of potential tighter political supervision of the Fed. The results? As shown below, not a single expert economist was prepared to support the idea: a large majority thought it was a bad idea. 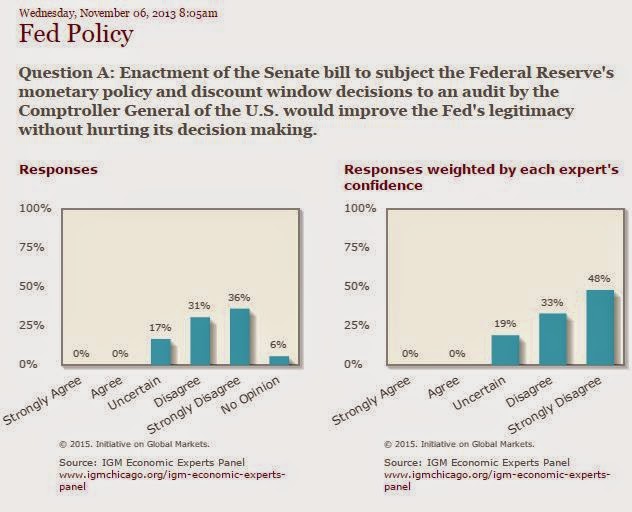 And then I came across this, which I think is the latest state of play as far as academic research goes: a 2014 paper on “The Effects of Central Bank Independence and Inflation Targeting On Macroeconomic Performance: Evidence from Natural Experiments”, which is available as a pdf either from the Review of Economic Analysis here or as a working paper here.

Here are the key findings:

As the article notes, we were at the very front of the pack in adopting an independent, transparent, inflation-targetted monetary policy – “New Zealand made the first move toward greater central bank independence with the sweeping Reserve Bank of New Zealand Act 1989, which created an independent central bank with the single mandate to achieve price stability” – and we were right to do it, and to stay with it. As the article found, and other articles had found before it, there have been big ongoing payoffs, and no ongoing cost. It would be nice to think that come the next general election, the tinkerers-for-the-worse left our monetary policy arrangements alone.