Petrol prices, and petrol profit margins, have been in the news. Labour, for example, wants an inquiry; ACT doesn’t; and apparently the AA hasn’t been happy about ‘miserly’ falls in local petrol prices as the world oil price has dropped sharply.

Much of the attention has been based on MBIE’s weekly monitoring of ‘importer margins’, the ‘importer margin’ being “the margin available to the retailers to cover domestic transportation, distribution and retailing costs, and profit margins”. Here’s the latest picture, for regular petrol. 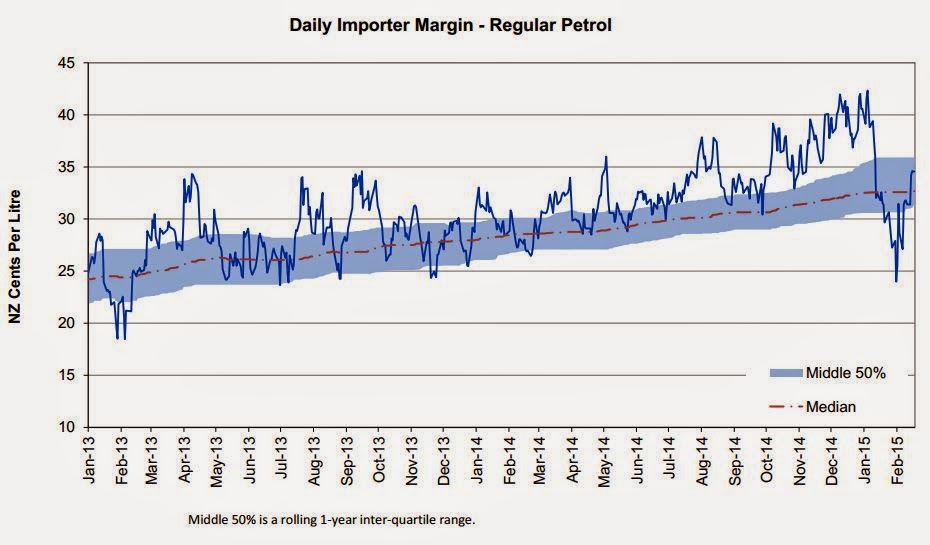 As you can see, the importer margin looks to have been climbing over the past two years, from an average of around 24 cents a litre to about 32.5 cents/litre, and on the face of it the rise looks rather dubious: it’s doubtful that domestic transportation, distribution and retailing costs have increased much in our low inflation economy, which means the only moving part left is wider profit margins.

I don’t know that I’m personally quite there yet with the wider profit margin story, though. For one thing the prices at the pump as measured by MBIE don’t reflect the discount you get at the supermarket, and I strongly suspect that those discounts have been rising. For ages our standard supermarket discount used to be 4 cents; then 6, 10 and even 20 cent discounts started popping up (tied to spend); and every other day my phone beeps at me with offers from the petrol companies themselves (the latest was a Caltex Black Caps 10 cents promo on Saturday, which I used). If everyone uses discounts – and they must have become pretty extensive by now – and the typical discount has gone from 4 to 10 cents as (perhaps for valid strategic or tactical marketing reasons) petrol companies have elected to pass on lower costs via coupons and discounts rather than as outright cuts to the pump price you see at the side of the road, then you could arguably explain away a good chunk of the apparent 8.5 cent rise in margins. It’s possible too that currency hedging might have produced a higher landed cost for oil than the unhedged estimated price MBIE uses.

If, however, subsequent inquiry shows that the higher importer margin is real, and does not have an arguably competitive explanation, what if anything should be done?

One thing you might be tempted to reach for is some sort of control on the size of retail markups. As a recent paper*, ‘The Impact of Maximum Markup Regulation on Prices’ (here as a pdf) has said, they have a clear logic: a maximum markup will catch the most egregious profiteers, who will be forced to lower prices, but won’t affect those who were able to get by on a lower one.

Or that’s the theory, in any event. But when the researchers looked at what had actually happened in Greece when the Greeks did away with the maximum markups wholesalers and retailers could charge on fruit and vegetables, they found that retail fruit and veg prices went down – the opposite of what you’d have expected when the constraints were removed. And by sizeable amounts: the authors found that retail prices dropped by 6-9%. Using the 6% number, the decline “corresponds to a 1 percent decrease in the price of food of a typical Greek household, and a 0.16 percent decrease in the consumer price index. This in turn corresponds to a decrease of €23 in expenditure per capita per year, amounting to €256 million [NZ$380 million] per year in aggregate (about 0.12 percent of GDP)”.

Retail prices went down because wholesale prices had gone down, and wholesale prices had gone down because the regulated markups took away “focal points for coordination”. You can imagine the discussion in the taverna around the corner from the Athens Central Wholesale Market: “So. Any of us could add on 12%, eh?” “Yup”. Thoughtful silence. “Another retsina, anyone?” “Don’t mind if I do. Cheers, lads”.

There are wider lessons here beyond the price of artichokes in Athens. The big one is that the first best solution to excessive profits is likely to be more competition: in Greece, the wholesale market was “a closed market in which only licensed sellers can operate” and one that had “several features… that make it more prone to collusion (centralized physical arrangement, barriers to entry, limited number of large competitors, daily interaction)”. Deal to that, and you’re well on your way. And secondly, and relatedly, don’t be too quick to reach for a big knobbly stick if you do go the regulation route: the authors say that their work fits with a lot of other work showing that “heavy regulation is generally associated with greater inefficiency and poor economic outcomes”. If you’re going to regulate, be as smart and light-handed about it as you can.

*It’s in an excellent series of discussion papers published by the Centre for Economic Performance at the LSE. The Centre takes an interdisciplinary approach to “the determinants of economic performance at the level of the company, the nation and the global economy”, and their output is always interesting. I know, another source of discussion papers will be overload for some – you can already spend too much time at SSRN or at the IZA – but if you’ve got the time, have a look. Well worthwhile.