I’ve gone on a bit in some recent posts about the necessity of efficient, flexible labour markets – noting (here, here and here) that the labour market tends to have huge gross flows with small net outcomes, and that it’s easy, with good intentions but bad policy, to stuff up the flexible working of hiring and firing. I also found some evidence that our own labour market stacks up pretty well, when considered in long-run international perspective, in keeping unemployment down.

I’d said in that last post that “if you’re concerned about unemployment, you’re likely to be better off if you come up with some form of social protection that doesn’t impede the flexible working of the labour market, rather than reaching for some “job protection” measure that makes it harder for employers to lay people off. Making it harder to fire, for example, makes it less attractive to hire in the first place”. I didn’t include anything concrete to back that up, but over at his blog Jim Rose happened to be writing about some recent local court decisions which appeared to be re-regulating employers’ ability to lay off staff (his two articles are here and here), and as part of his argument he’d found this. 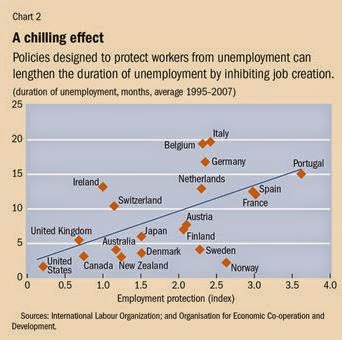 Isn’t that neat? There’s a clear link between how tightly protected existing jobs are, and how long people are stuck in unemployment before they get their next one – with the best of intentions, policymakers trying to make the labour market more secure from an employee’s perspective have produced a completely counterproductive outcome. It’s good to know that again our own labour market shows up to international advantage, with relatively low long-term unemployment and indeed even lower long-term unemployment than you’d expect from a country with our level of job protection. Australia scrubs up pretty well, too.

I asked Jim where the chart came from, and he pointed me to the source, a June ’14 article in the IMF’s Finance & Development publication profiling the career of Christopher Pissarides, who won the Nobel prize in economics for his work on labour markets and unemployment. It’s a good read. From a policy point of view, the bottom line is

“protect workers, not jobs.” Trying too hard to protect existing jobs through excessive restriction of dismissals can stop the churning of jobs that is necessary in a dynamic economy. It is better to protect workers from the consequences of joblessness through unemployment benefits and other income support—accompanied by active policies to get the unemployed back to suitable jobs before their skills and confidence deteriorate

Incidentally, if Jim is right that our Employment Court “stands apart from the modern labour economics of human capital and job search and matching as well as the modern theory of entrepreneurial alertness, and the market as a discovery procedure and an error correction mechanism”, maybe there’s a case for it to sit with a lay member who knows something about labour economics. The High Court sits with an experienced economist, when there are major competition or regulation cases, and it’s a system that works well.