Last week the Reserve Bank published the latest in its Analytical Note series, ‘The Reserve Bank’s method of estimating “potential output”’ (pdf here). If you’re into macroeconomics in general or monetary policy in particular, you probably don’t need your hand held about what potential output, and the output gap, are, but in case it’s passed you by, the Note explains that

Potential output can be thought of as the level of activity that the economy can sustain without causing inflation to rise or fall, all else equal (for example, assuming no shock, such as big changes in oil prices). By implication, the difference between actual and potential output (the output gap) indicates the extent of excess demand, and therefore the direction and magnitude of this source of inflation pressure

This latest Note, like its predecessors, is a useful resource: I could see undergraduate economics courses using it, and maybe  the more with-it secondary school classes (yes, there are some equations, but they’re no biggie). There’s also a one-page ‘non-technical summary’ at the front, so if you’re the proverbial intelligent lay person that’s for you.

The Note has two graphs which I thought were interesting. The first is a straightforward graph of where the output gap has been, where it is currently, and where the Bank thinks it’s headed over the next year or two. The implication would be that the Bank needs to be watchful about potential inflationary pressures down the track, though (a) how it would tighten policy without causing the Kiwi $ to head into the stratosphere isn’t obvious and (b) it’s possible that inflation, for some reason we don’t yet fully appreciate, isn’t picking up the way it used to when economies run hot (it’s a major policy conundrum in the US at the moment).. 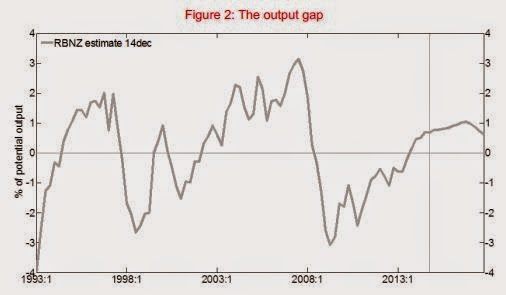 This second one, for me, was highly thought-provoking. It shows what the output gap in early 2012 was estimated to be at the time, and how that estimate later changed as revised GDP data came to hand. Originally, the economy was thought to be running well below capacity; as more complete data came available, it became apparent that the extent of spare capacity was nowhere near as large, and even that the economy might have been running on the hot side, a bit above capacity; and on the latest data we’re back to an assessment that it was running slightly on the slow side. As it happens, no harm was done – policy in early 2012 was kept at its supportive post-earthquake level, which turned out to be an okay stance to have taken – but you can see the potential for policy mistakes. 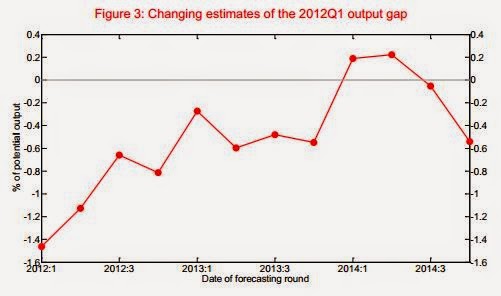 What are some of the other implications?

I’d be more charitable when assessing the performance of central bank Governors. There are plenty of trigger-happy people out there with a Gotcha! mentality: the reality is that monetary policymakers are likely doing their best in an environment of very considerable uncertainty about where are are now, let alone where we are heading next. Ditto Finance Ministers, who face exactly the same issue of assessing where we are in the economic cycle.

The uncertainty also suggests (everything else being equal) that policy is better adjusted gradually rather than in big dollops. Somewhere around the internet in the past few days I saw the analogy of driving in the dark beside a cliff: if you’re not sure where you are, it’s probably best to drive slowly until you get a better idea. Even if you do become easy game for the Gotcha! brigade, who will be saying you’ve got “behind the curve”.

You’d clearly want to be careful about how much reliance you place on measures like the output gap, and you’d want to be supplementing it with all the other evidence you can garner about how hot or cold the economy seems to be (which is why the RBNZ has all those meetings with companies and organisations in between its policy decisions). It’s also why I think business opinion surveys and their ilk are so valuable.

And then there’s that problem of the ‘true’ (or ‘least untrue’) data only becoming evident years after it’s any good for cyclical policymaking (though the data will still be fine for many less time-dependent uses). I’d like to think this will become less of an issue, in particular as we become more adept at using ‘administrative’ data (things like GST returns, or spending at the supermarket checkouts, that are being collected for non-statistical reasons of their own). That’s the way Stats is headed, and they’re right: it’s likely to be cheaper,  more accurate – and faster.