Back to the report. Lot of things to like by way of positive developments in the sector, though there is still quite a flavour of the deadweight legacy cost of the copper network, and the Commission’s likely reduction of the copper price next month will be a positive move. In particular among the positives, consumers are mostly getting better value for mobile services: as the two graphs below show, mobile bundles are competitive by international standards, and prices have been falling. 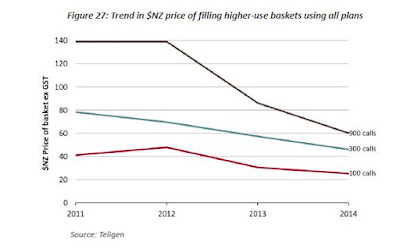 But there are some oddities even on the mobile side. When you see the table and graph below you have to ask, why the very expensive prices by international standards for slugs of mobile data, and why aren’t they falling, too? 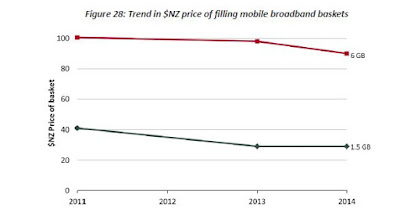 I don’t have any good rationale for this and neither does the Commission: on static prices, it comments (p33) that “This suggests there is a lack of demand for and/or competition to supply mobile broadband data when it is not part a bundle of mobile phone services, particularly when it is a relatively large amount of data”. Don’t know about lack of demand – you’d think there are plenty of people running around these days with lots of uses for their tablet-style devices – and you’d think mobile companies would compete harder for this upmarket business. Odd.
Apart from the prices, usage, revenue and investment sort of stuff, the report has heaps of other interesting stuff. For example, did you know this (below) about the percentage of our students who are taking computer science courses?

There was one pair of graphs which I had some difficulty with. I’d like to believe this one, which shows we’re right at the head of the international pack for the proportion of businesses selling over the internet… 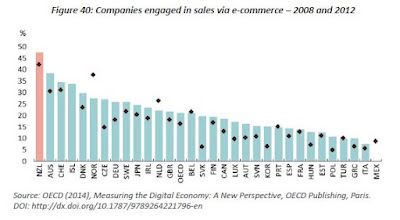 …but I can’t square it with this one… 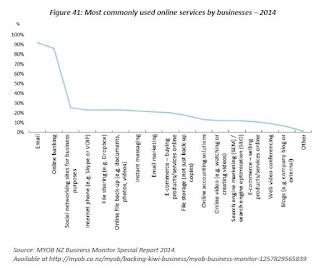 …which says that only 11% of small businesses make sales over the net. If (conservatively) you say 80% of all businesses are small businesses, you can’t get to the national 47-48% figure of the first graph.
Never mind: this is still an excellent resource. As well as all the obvious stuff, it’s also got a very useful chronology of events in the sector over the period January 2014 to March 2015: if, like me, you have to go away and look up things like the sequence of draft copper loop pricing decisions, it’s all there in one convenient spot.