Since none of us can really affect political outcomes, it’s generally irrational to pay too much attention to politics. On that measure, men are far less rational than women – or at least by the studies of political knowledge I’ve come across (two examples), and my own work on New Zealand.

This general finding is supported by a very different kind of method. Schwatz et al trawled through 700,000,000 words, phrases and topics provided by 75,000 Facebook volunteers. The authors were interested in personality differences and language. But the gender difference in propensity to talk about politics was stark. Here are the word clouds, sorted by gender. I apologise for the curse words. 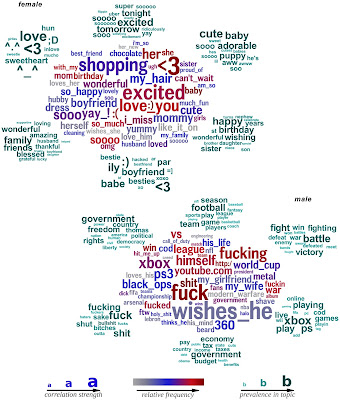 If we look at the topic clusters, women’s focused on family and feelings (emotions, cute things, happiness, friendship, family/friendship); men’s were politics, sport, war, video games, economics-politics, and cursing. Or at least that’s my summary of each of the topic clouds. Within the central core, government shows up on the men’s side; nothing policy-related shows up on the women’s side. Or, at least, these are the words that are most *distinctively* associated with each gender. If somebody on Facebook is talking about the economy, tax, budget, the government, freedom, democracy, rights, or liberty, it’s likely to be a guy – at least in this sample.