The Science Media Centre points to some new statistics on drinking during pregnancy. Given the alarming figures they highlighted, I was surprised to see that the actual data looked pretty good.

The analysis indicated a high prevalence of drinking, including binge drinking, among mums to be. The prevalence of drinking alcohol ranged from 20% to 80% in Ireland, and from 40% to 80% in the UK, Australia, and New Zealand.
Across all countries, factors associated with alcohol use included smoking during pregnancy and Caucasian ethnicity.
“Our data suggest that alcohol use during pregnancy is prevalent and socially pervasive in the UK, Ireland, New Zealand and Australia”, conclude the authors.

Wow. Sounds pretty terrible. But here’s the paper. Table 4 has the main results. 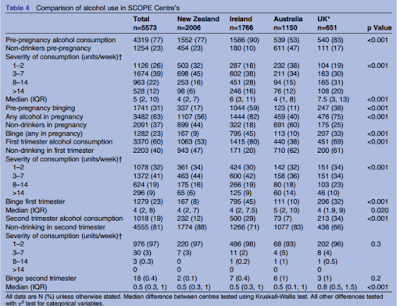 That’s hard to read, and I’m sorry. What does it show? I’ve transcribed the NZ column into this chart; I hope I haven’t introduced any transcription errors. 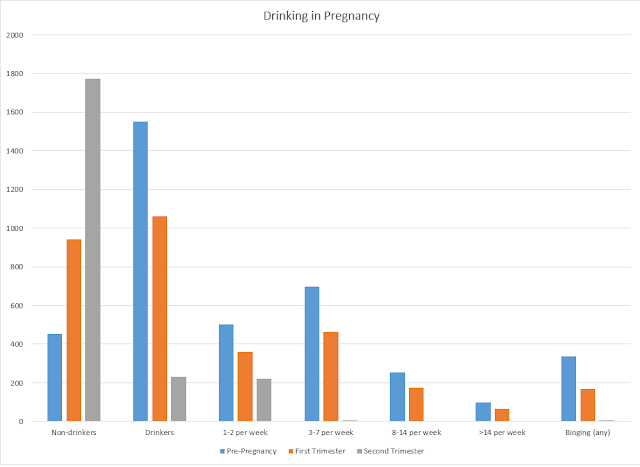 The y-axis has the number of women in each category. The number of women reporting non-drinking increases substantially from pre-pregnancy (the blue bar) to first trimester (orange) and again to second trimester (grey). They do not have separate data for third trimester.
During first trimester, the main risk from heavy drinking is miscarriage. After that, heavy drinking can yield foetal alcohol syndrome. But there’s no evidence that 1-2 per week does harm.
What do we see? In the first trimester, 35% of women consume more than 1-2 units per week. Those women are at increased risk of miscarriage. 12% drink over one unit per day on average.
In the second trimester, 220 of 2006 women, just over 10%, report consuming 1-2 drinks per week. There is no evidence of harms from that level of drinking. 7 women report consuming 3-7 drinks per week – which is still within the safe range. No women report drinking more than that on average and two of 2006 report ever having binged during the second trimester.
Binging during the second trimester is a pretty bad idea. But it is 0.1% of those surveyed, or 0.35% if you want to include everybody reporting in the 3-7 per week range.
Expect scary newspaper headlines tomorrow accompanied by pleading calls for action. But remember that the rate you should care most, if foetal alcohol syndrome is your main concern, about is 0.1%. About 35% of women are at increased risk of miscarriage. Both are well below the highlighted 40-80%.
Read Emily Oster’s summary on drinking and pregnancy.

I reviewed many, many studies, but I focused in on ones that compare women who drank lightly or occasionally during pregnancy to those who abstained. The best of these studies are ones that separate women into several groups—for example: no alcohol, a few drinks a week, one drink a day, more than one drink a day—and that limit the focus to women who say they never had a binge drinking episode. With these parameters, we can really hone in on the question of interest: What is the impact of having an occasional drink, assuming that you never overdo it?
I summarize two studies in detail in my book: one looking at alcohol consumption by pregnant women and behavior problems for the resulting children up to age 14 and one looking at alcohol in pregnancy and test performance at age 14.  Both show no difference between the children of women who abstain and those who drink up to a drink a day. I summarize two others in less detail: one looking at IQ scores at age 8 and a more recent one looking at IQ scores at age 5. These also demonstrate no impact of light drinking on test scores.
I argue that based on this data, many women may feel comfortable with an occasional glass of wine—even up to one a day—in later trimesters. (More caution in the first trimester—no more than two drinks a week—because of some evidence of miscarriage risk.)

Her book on pregnancy is excellent – if you want actual evidence rather than scaremongering.
Previously: