I’ve been away at the NZ Association of Economists’ annual shindig – full conference programme here, with links to abstracts and to quite a few of the full papers, including my own one on why our Commerce Commission should have the right, and obligation, to carry out market studies – and it’s been the usual interesting mix.

This afternoon I went to the session on ‘Income and Inequality’ – yes, I know, it’s very trendy these post-Piketty days, but I went all the same – and I learned something that maybe I should have known before, but didn’t. Here it is. 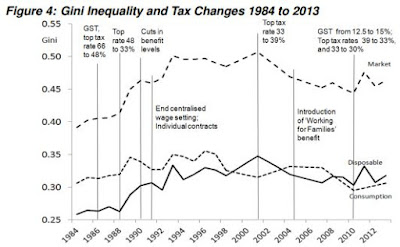 This chart has been all over the blogosphere already – mostly because people have wanted to point out that, contrary to what the fuss about Piketty might have led you to believe, income inequality peaked some 20 years ago and has either stabilised or dropped since – so I won’t belabour it much further. My only comment would be that I suspect the low level of inequality in 1984 was somewhat artificial and somewhat undesirable, in the sense that the wage freeze and fixed wage relativities of late Muldoonery were gummaging up the efficient workings of the labour market: pay rates were not able to move to reflect supply and demand for different occupations. But in any event, there you have it: inequality rose mid ’80s to mid ’90s, then steadied or maybe declined.

You knew that. I knew that. But what I certainly didn’t appreciate was how misleading a Gini coefficient can be, looked at in isolation, and I learned that from a very interesting paper presented by Athene Laws (of Motu Economic and Public Policy Research) and co-written by Athene, Victoria’s Norman Gemmell, and the ubiquitous John Creedy.

Athene’s big point,which I’ve taken from the abstract of her paper – was that

In answering distributional questions that are important for many economic phenomena, researchers and analysts should not solely examine cross-sectional aspects to the neglect of income dynamics and mobility across time.

In other words, the Gini coefficient is based on a cross-section of income in a single year. But what if, one year, I start off  working as a wage slave, the next year I make pots of money from a book or an app, the year after I make nothing when my second book or app goes phut, the year after that I’m back working for someone else. One year I’ll have been right up the wealthy end of the income distribution, the next year right down towards the poor end.

On average, I may have done reasonably okay over time. And if everybody else has been experiencing the same thing, they’ll have done reasonably well, too. Over time, we may all end up much the same, which means when you look at our incomes over a longer time-frame, the Gini coefficient could well turn out quite low, even if the Gini snapshot of any individual year still shows quite a wide disparity of earnings. And Athene’s data (based on access to an anonymised sample of IRD tax returns) showed precisely that pattern: there is income mobility over time, and the longer the timeframe you use to look at people’s earnings, the less the actual income inequality.

So that’s what I learned: never trust a Gini coefficient on its own. It may or may not be telling you something interesting, but at a minimum it needs to be read alongside what’s happening to mobility. That doesn’t mean that you can wave a magic mobility wand and all inequality concerns are wizarded away: unfortunately, there seems to be evidence that in some places equality of opportunity is diminishing, and the gateways to those good years at the top of the income spectrum are getting narrower (eg as the kids of the already well-to-do get a bigger share of entry to the better universities). But it does mean that you need a bigger picture of what’s going on than Gini alone can tell you.