There’s been some discussion on Twitter and elsewhere about whether enough has been done under the current or previous governments to achieve ‘transformational’ change – something big enough to make a real difference to New Zealand’s potential rate of growth and future standard of living.

As it happens, the OECD  has got something useful to add to this debate, both on the issue of whether enough is being done, and on what the transformational changes might be. Its Going for Growth series has been coming out every other year since 2005, and is squarely aimed at identifying priority policies that would raise countries’ rates of economic growth. You’d have thought that it would have received a ready hearing in New Zealand, where relatively slow growth over long periods of time is our number one economic issue, but strangely enough the amount of media attention it gets is generally minimal – this year’s version also came and went (in February) with little local coverage.

One thing the latest version says (press release, summary etc here and the whole thing online here) is that appetite for transformational change has waned across the developed economies: it’s not just us. After a burst of ‘we’ve got to do something’ fervour during and immediately after the GFC, “The pace of structural reform has been slowing in the majority of advanced countries across the OECD over the last two years” (p16). And that means that large, ‘transformational’ potential gains in GDP are being left on the table. As the OECD calculates it

The OECD’s also done a country-by-country calculation of how much GDP would increase if its proposed reforms were put in place: here’s the result (extracted from Figure 4.5 on p120) of the ‘moderately ambitious’ one (the OECD also had one scenario that was less ambitious and one that was more ambitious again). We’d actually gain more than the average OECD country if we got on with it.

What sort of reforms does the OECD have in mind we should carry out?

Before showing the full list, it’s worth pointing out that the OECD puts its policies into two boxes – the ‘labour utilisation’ box holds the policies designed to get people into work (eg liberalising labour market regulation), and the ‘labour productivity’ box holds the ones designed to boost how much people can do when they are employed. In our case, the focus is almost completely on the ‘labour productivity’ box, as this graph (extracted from Figure 1.5 on p29) shows. It explains how much of each country’s income level, relative to the average level of income in the top half of the OECD, is down to labour use and how much down to to labour productivity. In our case, it’s entirely down to labour productivity: we’re actually better than many other countries at getting people into work, but we lag when it comes to what they produce when they’re employed.

So here’s the full set of proposed policies. 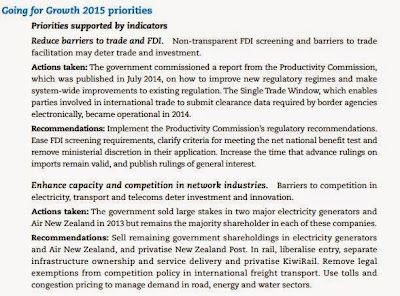 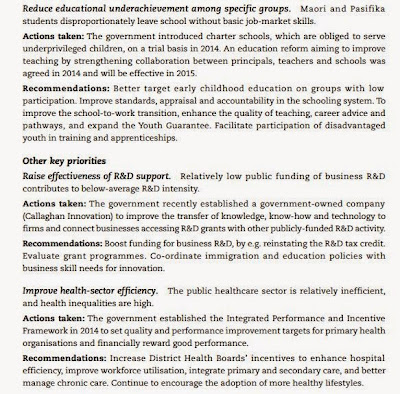 It’s a balanced list. Yes, there are things there that won’t appeal to the lefter-wing end of the world (such as privatisations). But equally there is a strong emphasis on fixing socially inequitable outcomes in education and health. Because of the mix, it’s probably unlikely that any one government is going to be able to pick them all off: at best we might get one government doing one subset, and the next government doing the rest (and hopefully not unpicking the first lot).

Hopefully we can work our way through them one way or another: as long as they’re left undone, we’re some 8% poorer than we need be.