I’d no sooner posted a piece on our relatively poor infrastructure than I discovered that Ireland’s National Competitiveness Council had come out with its latest annual assessment (pdf) of Ireland’s competitiveness.

It picked up on exactly the same point: as it happens, Ireland scores almost exactly the same as us (a global 27th for them, a global 29th for us) on the perceived quality of infrastructure. Here’s how the Irish showed the picture from their perspective: they happened to include us in their graph. 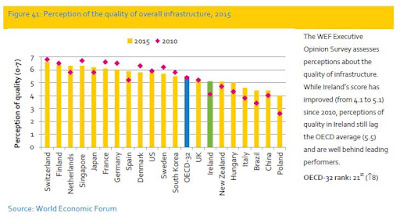 It’s interesting to see that the rating of Ireland’s infrastructure has improved, for a mixture of good and unfortunate reasons: “Perceptions about the quality of Ireland’s infrastructure have improved since 2010, reflecting both the impact of a decade or more of investment, and the reduced capacity constraints as a result of the economic downturn” (all quotes are from p17 of the report). Ours is also better than five years ago, but only slightly. Despite the Irish improvement, “Ireland, however, still lags behind the OECD average and scores significantly less than leading performers”, and the same is true for us.

The Irish policy conclusion, which I think applies with equal force to us, was

As the economy continues to improve, further investment growth is forecast for 2015. However,projected public investment levels are insufficient to address the emerging infrastructural needs of a growing economy and population, particularly as a significant proportion of public funds will be absorbed in maintaining the existing stock, leaving less funding available for new investment. While recognising the importance of maintaining sustainable public finances, further additional targeted investment is urgently required to address constraints which could undermine the economy’s growth prospects, dampening productivity growth, increasing costs, and weakening Ireland’s attractiveness as an investment location (for both foreign and indigenous investors). To achieve the improvements required, prioritisation will be required such that over the medium term, investment is directed to those areas of the economy which can have the greatest impact upon competitiveness. It is critically important to put in place the appropriate policy and regulatory frameworks to facilitate this targeted approach.

Speaking of those “appropriate policy and regulatory frameworks”, I discovered from Joel Mokyr’s history of the Industrial Revolution, The Enlightened Economy, that the Birmingham Canal was authorised by Act of Parliament in 1768 and completed in 1772. I looked it up here: it was some 22.5 miles (36 kilometres) long, and took only 13 months from the first public meeting to regulatory approval. The first 10 miles were built in only 18 months, and the whole thing from approval to completion took four and a half years.

I seriously doubt we could match that today.