The government made a decent effort in the Budget to boost the spend on infrastructure, as it showed in this graph, taken from the ‘Capital at a Glance’ document handed out yesterday as part of the Budget material. 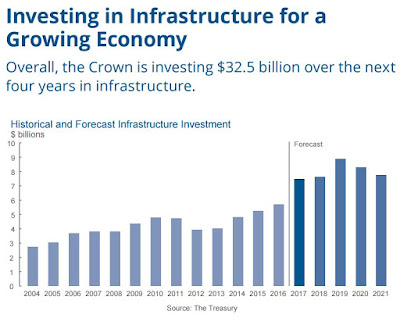 But if you thought that we will have an extra $32.5 billion worth of shiny new infrastructure in four years’ time, think again.

All these numbers ignore depreciation. But, as we all know, road surfaces get worn, bridges develop cracks, classrooms get leaks, equipment wears out. How much of the budgeted $32.5 billion is actually going to get us new stuff, and how much is going to maintain, repair or replace existing stuff? Repairs and maintenance are of course a good and necessary thing, and nobody’s begrudging that spend, but how much of the infrastructure is going on maintenance of the stuff we’ve already got, and how much on genuinely new additional stuff?

The answer is, at least a good half of the announced spend is keeping the existing stuff in good nick, and only around half, at most, is for new stuff.

Here’s the calculation, which I’ve taken from Note 15 to the Forecast Financial Statements on page 107 of the Budget Economic and Fiscal Update (the ‘BEFU’).

You’ll see that the table says that the government is planning to add $28.8 billion to the stock of infrastructure. This is less than the $32.5 billion in the graph, because the numbers in Note 15 don’t include some $4 billion of new spending that hasn’t been allocated to anything specific yet. But even if you add that $4 billion to the $28.8 billion in the table, you get a gross addition of $32.8 billion, and on the (generous) assumption that there is no depreciation at all on all this extra $4 billion, the answer comes out, gross addition $32.8 billion, depreciation $18.4 billion, net addition $14.4 billion. Maintaining existing stuff 56%, adding new stuff 44%.

All these numbers involve some forecasting, and the forecast events may or may not happen, and they also involve some judgement calls about what assets are worth. Valuation can be a bit of an art sometimes, though having looked at how these assets are valued and depreciated (which you can read for yourself in the ‘Accounting policies’ bit of the BEFU’s ‘Additional information’ document, pages 43-6) the methodologies look reasonable enough to me. All that said, let’s round things off massively to allow for the uncertainties: very roughly, of every $2 that’s going to be spent on infrastructure over the next four years, $1 will go on new stuff and $1 will keep the old stuff going.

To recap. There’s nothing wrong with counting maintenance in the total spend: there are too many countries which roll out new facilities and don’t maintain them properly, so it’s good that we allow for it. And it’s good that we’re upping the total spend. It’s rather late in the day, and there is still a huge infrastructure deficit, built up under a succession of governments, to tackle – as I’ve noted before, there are Third World countries making a better fist of building links to their airports than we’ve been able to manage – but we are at last getting more serious about it.

That’s all good. But next time you see a big spend-up announced, calm down, and remember to take $4.5 to $5.0 billion a year off the headline number, to get some feel for the extra stuff we’re actually getting.