Radio New Zealand reports on a new iteration of the Growing Up in New Zealand study looking at maternal alcohol use during pregnancy. I have been unable to find the cited study, so we’ll go with RNZ’s reporting for now:

The lead researcher of a new study that has found nearly a quarter of women drink alcohol during the first three months of pregnancy says the findings prove more needs to be done.

The findings were part of the Growing Up in New Zealand study following nearly 7000 children from birth until they are aged 21.

It concluded drinking was common in New Zealand women, particularly among Pākehā and Māori, and some women drank alcohol heavily during pregnancy.

“I think why we’re seeing it in European and Māori women is because of the prevalent drinking culture and I think that’s fundamentally where things need to change, so that alcohol isn’t a norm and it certainly isn’t regarded as a thing that you do if you are possibly, likely or currently planning to be pregnant.”

Again, I haven’t the study. But we do have the prior iteration of it that Superu looked at a couple years ago. Keep in mind that there’s a vast difference between having a drink or two per week, and having several drinks per day.

“Now, thinking just about alcohol, and thinking about before you were pregnant, and
during your pregnancy.
On average how many drinks of alcohol – beer, wine, spirits …

I expect the first three months’ figure will then be an average of the period before they knew and after, so the drop from the pre-awareness category to the first-trimester category will understate the drop after the respondent became aware of the pregnancy.

Here’s what they found:

But the older Superu work had the finer details on consumption patterns – since the broad aggregates are identical, I doubt we’re far wrong in looking to the older breakdowns in the absence of the new study. Why oh Why won’t RNZ link to the studies they’re reporting on?

The vast majority of those who consumed alcohol after the first trimester, in the Superu study, consumed less than four drinks per week.

There is a sharp contrast between the patterns of alcohol consumption before and after awareness of pregnancy. Around seven in 10 women (71 percent) reported drinking alcohol before becoming aware of their pregnancy. The proportion quickly reduced to 23 percent in the first trimester, and to 13 percent after the first trimester.

In the second and third trimesters the percentage of women not drinking alcohol increased to 87 percent. Of the women who said they drank alcohol during the second and third trimesters, two-thirds consumed less than one drink per week and less than 1 percent of all pregnant women reporting drinking four or more drinks per week during those periods.

There are pretty strong demographic correlates among the heavier drinking cohort suggesting that targeted interventions might make more sense than population-wide measures.

Recall also Emily Oster’s literature survey [the full treatment is in her book] around the relative risks of light drinking as compared to heavier drinking. Castigating women for having a drink or two per week seems like bullying.

UPDATE: The study is in the latest NZ Medical Journal. Here’s the key table. 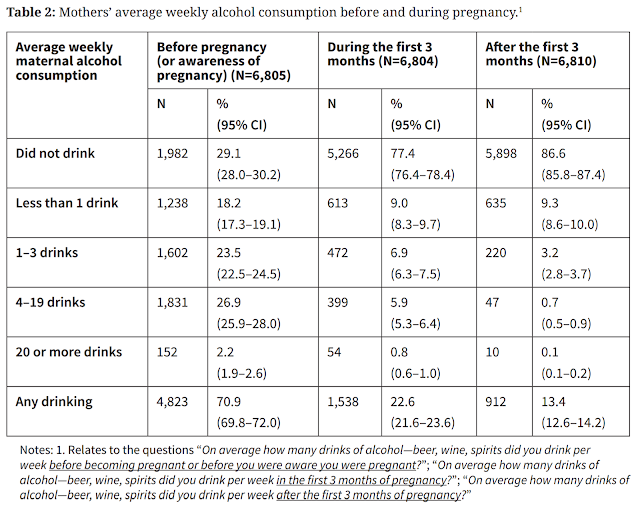 It is identical to the 2015 Superu study. It is amazing how media picks this stuff up as new findings and absolutely fails to notice that there’s nothing new here. The NZMJ piece has some logistic regressions; so did Superu. The main difference is that NZMJ takes this a strong call for population-level restrictions on alcohol (along with an accompanying editorial from, you guessed it, Sellman and Connor), where Superu just puts up the numbers and provides a fairly reasonable conclusion:

On a more positive note, the analysis reveals the presence of a strong, across-the-board intention to reduce alcohol intake, even among the “Hardy drinkers”. The challenge for public health is how to help these women translate this good intention into successfully stopping drinking as early as possible during pregnancy. For each of the different pathways identified in this report, different levels and types of support may be needed and the women may need to be encouraged to stop drinking at different stages of the pregnancy. Women who made changes slowly will need to be incentivised differently from those who made changes quickly. Women who drifted or regressed will need to be supported at the critical times to stop them from reverting back to drinking.

Figuring out how to encourage the <1% of women whose drinking during pregnancy is risky to scale back is really important. And I doubt like heck that there’s any kind of evidence base for Connor and Sellman’s suggestion that banning alcohol sponsorship in sport might help with this.

I do not understand how this got published at the NZ Med Journal. At any decent economics journal, it either would have gotten a desk reject if the editor knew the area or a referee would have looked at it, saw that made no particular contribution given the existence of the Superu report, and recommended rejection.

The authors didn’t even cite the prior Superu report. Did they know it existed? Did the referees? Did the editors? What a clownshow.

Oh, and it took the NZMJ article 9 authors to come up with analysis similar to what Superu did 3 years ago with 3 authors.