There have been some interesting comments in the media lately from Prime Minister John Key, regarding the decline in NZ’s productivity. Economists sometimes refer to this decline as the New Zealand paradox: “The mystery is why a country that seems close to best practice in most of the policies that are regarded as the key drivers of growth is nevertheless just an average performer” (OECD, 2003). To those of us who work in science and technology, the missing ingredient is obvious: innovation. 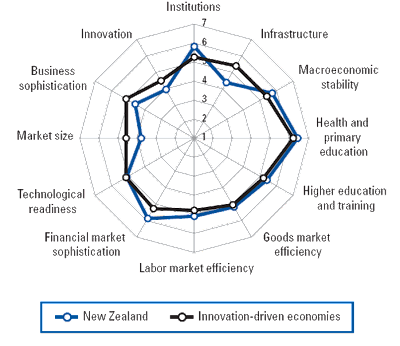 It turns out that there are numerous large communities of inventors connected in this way, and one network from which NZ can learn a lot, is based in Finland (1,300 inventors), largely around patents owned by Nokia. This network appeared in only a decade in a country with a population similar to our own! As Shaun says, “in the early 1990s, few would have described ICT as a Finnish strength, but by the end of the decade they were vigorously patenting and writing papers in ICT, and had increased their electronics exports tenfold to more than NZ$20 billion per annum.” 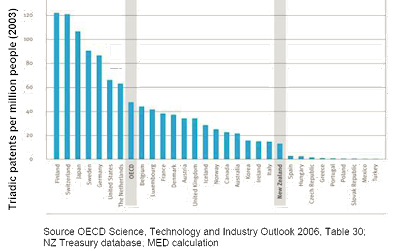 Where did they get that inventive talent from? It appears that the Finns trained Nokia’s inventors in their Universities. Sure, the Finns were lucky that mobile phones came along when they did, but I think its proof, as Shaun says, that “an innovation-driven economy is not bound by its geography or its history”. So we can forget about all this rubbish about NZ being too far away from anyone. With the MacDiarmid Institute being a collaborative network between NZ Universities and Crown Research Institutes, they are in an excellent position to try and emulate this here in NZ. The question is, what technology will NZ lead the world in? Perhaps something in the CleanTech area, as I’ve talked about before. Whatever it is, we will have to remain flexible and extensive enough to respond to new opportunities when they arise, which raises some very big questions regarding the current crappy science and technology policy of low investment and “picking winners.”
I sincerely hope that Shaun’s excellent research is spread far and wide, and I wish him well in achieving his (I believe attainable) goal that “one day people will be studying us to see how we did it.”