All are performance enhancing to varying degrees, but perhaps not quite as much as the latest hi-tech swimsuits worn by competitors at this years World Championships in Rome. There is a lot of talk in the media at the moment in regard to these swimsuits, which have seen numerous records broken so far. And not just broken, smashed in some instances, by up to 6 seconds! The science behind these suits is quite interesting. There are two aspects to it – posture and drag. 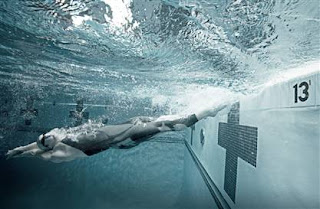 The corset-like suits are made of an incredibly compressive material (apparently they take an age to squeeze into) that holds the swimmer in an optimal posture. Because the swimmer doesn’t have to use any of their muscles to hold this posture (like usual), more of their energy can be directed to their propulsion through the water. The compressive nature of the suit also stops water becoming trapped in the suit, and reduces the amount of skin ‘wobble’, which both contribute to drag, the second aspect.

Drag refers to the forces that oppose the relative motion of an object through a fluid medium. It is wasted energy. In chemistry we call something that is attracted to water hydrophilic, and something that repels water hydrophobic. These hi-tech suits are hydrophobic – they actually repel water, like a bead of water on a lotus leaf, or like oil in water. This creates a water-repellent seal that adds buoyancy, lessens drag and creates record swim times.

Speedo’s LZR suit did this by adding polyurethane panels over the parts of the body that contribute the most to drag. This suit saw a multitude of records fall in Beijing 2008, and 94% of gold medals were won by swimmers wearing LZR’s. The obvious next step was to make an entire suit from the stuff, and this is what the current outcry is about. There is an excellent article about it all here.

So, at what level is science in sport too much? Where does the competition of man vs. man instead become a competition of who has the best equipment? Personally, I have no problem with it – I believe sport science (both physiologically and technologically) will continue to evolve because people will always strive to be fitter, faster and stronger. The question is, how can we level the playing field, so that good competition, the real essence of sport, is still the centerpiece of the show?