One of the key things I think scientists don’t do well enough, is communicate. I know I am not alone in having this view.

The scientific method of systematic observation, analysis, and peer review, is one of the most robust methods of investigation going around (and has been so for centuries). This approach has an inherent honesty, and I think perhaps one area in which science communication breaks down is the portrayal of this honesty. In the public’s eyes (I hope…) scientists are looked to for answers and advice but the inherent honesty in the scientific method often means we are not willing to make a concrete claim – something is only true until proven otherwise. And so this leads to mistrust, or confusion. Scientists seem to be content with laying the facts down for someone else to make a decision, and being done with it.

Communication is not something that everyone is good at, and poor communicators can be found in almost any profession. Communication by scientists has become ever so vital however, given the pressures facing mankind in climate change, energy, and food and water shortages, for example.

And so the only way to improve this is through practice. It would be nice if a communication paper was a mandatory part of any degree, but this is unlikely. Through the NZ Science Media Centre I have become aware of a really cool collaborative project starting at the University of New South Wales. It is called the New Science Journalism Project and it invites science and journalism students to submit articles which will be delivered through online media. 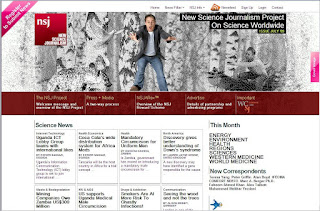 I think this is a great way for students to gain real world experience, and later on in their careers, when the time comes for them to communicate their science, perhaps in the hope of gaining research funding, or even influencing a policy change, they will be experts.