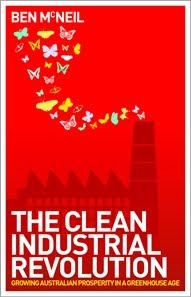 I have just finished reading the brilliant new book by Ben McNeil, called “The Clean Industrial Revolution.” Ben is a climate scientist and economist at the University of New South Wales in Australia. As the subtitle suggests, his book is about how to grow prosperity in a greenhouse age.

Which was quite timely, considering cabinet announced on Monday their plans for a revised Emissions Trading Scheme. I was always a wee bit hesitant to wade into the whole carbon tax/emissions trading scheme debate because I had not made my mind up fully on the topic. After reading Ben’s book and talking to my learned economist friend, goonix, I believe that it is essential for NZ to begin either a tax or trading scheme.

I think a lot of the debate centred around the question of how much is it going to cost our economy now, vs. how much will it cost to fall in line and adapt later? We are only 0.1% of the worlds emissions after all, so why spend all this money, lets just wait and see what the world does and adapt later.

Well, one of the key points I took out of Ben’s book is that creating a ‘carbon price’ will be a massive incentive for innovative change. When (not if) the world moves to a low carbon future, any country that is researching, commercialising and exporting these new clean technologies will be in a great economic position. Surely it would be harder to do this if we chose to wait and adapt, giving the rest of the world a head start. (Note: Masdar City, in the UAE, which I have blogged about here).

Sure, some industries in NZ will be harder hit than others initially, (ie. the polluters, farmers and their farting animals) however, do we want to end up dependent on a costly carbon rich lifestyle? It would be like suffering the same fate as those countries that resisted imposing high taxes on oil. Japan and the EU set high taxes, and their vehicle industries were given incentive to develop more efficient engines, which they did (up to 30% more efficient in fact). The US, on the other hand chose to keep the price of petrol near the market value, and as a result are heavily dependent on oil. There was no incentive for GM to innovate, and as a result GM have given their market share up to Toyota, and pretty much gone bust. The same will happen with anyone still intensively using carbon.

The book is focused largely on an Australian context, however the whole way through reading it, I felt that I could have easily substituted “New Zealand” every time I read “Australia”. Apart from the huge solar resource Australia have of course, we have a lot in common. Perhaps we are even in a better position than Australia, as we have a lot of hydro, more wind generated power, are less dependent on coal fired power stations, and already have less emissions per capita. Creating a highly innovative CleanTech economy will create new, high tech jobs that won’t be able to be outsourced to China. It’s about being at the forefront of change, and I believe we have the goods here in NZ to make it a reality.

You can preview the book here.