I read an article on Stuff.co.nz recently about an electric motorcycle (KillaCycle), that can accelerate from 0-100 km/h in 1 sec, and has a top speed of 274 km/h. Pretty phenomenal performance!

The technology that makes this possible is provided by a company in the USA called A123 Systems, who I’ve been aware of for some time now. They were spun out of MIT in Boston in 2001 to commercialise their research on nanophosphates for lithium ion batteries.

The fundamental properties of a material differ substantially when we shrink its constituent particles down to the nano scale (1 billionth of a metre), and in the case of A123 Systems and their materials, they see an improvement in both the charge and discharge rates, and the power density (power to weight ratio) when they do this. This is important, because it means that batteries can be used for applications that demand large amounts of power rapidly (like the KillaCycle for its acceleration), but also need very light materials. Previously this type of power could have only been provided using large, heavy batteries, which has until this point ruled out the practical use of batteries in transport. The ultimate goal is to have a battery that can discharge rapidly for acceleration and charge again very quickly, so that covering large distances in an electric vehicle is no longer a problem. 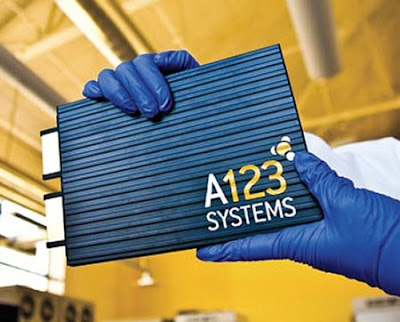 To bring this back to a NZ perspective, this is just the kind of clean technology we should be researching and developing. In a low carbon world, when the rising curve of oil prices crosses the falling curve of battery prices, there will be a mass market for electric vehicles that companies like A123 Systems will be in an excellent position to capitalise on.

PS. The KillaCycle is apparently coming to NZ, for all you…errr petrol (battery) heads.