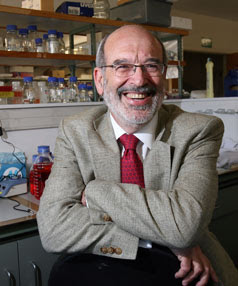 The second point from Sir Peter’s talk ‘Can Transforming Science Transform NZ?’ revolved around the blurred boundaries between science and business. The two are very different. Things cannot be easily measured in science that are valued and required by business, for example, profit forecasts, return on investment and other milestones. Science just doesn’t work that way – it is often hard to predict what will happen.

Simon Upton points out in the Dominion Post that “Politicians and managers just don’t know enough about the essentially creative drivers of research to try to manage them.”

Sir Peter stated that the importance of business planning in grant applications has increased over the last decade. And so it should I believe, because scientists should not just get ‘money for jam’ – they must be accountable to taxpayers like everyone else. But because NZ Business investment in RST is so low, this has meant that the role of this business planning has fallen largely with the scientists, and as pointed out above, scientists really have no idea about business and vice versa.

Scientists have confused themselves between technology transfer and fundamental research, essentially trying to fit a mould while being micromanaged via the strict government grant process, which in Sir Peter’s view creates a cynicism that leads to second-rate science.

Second-rate science achieves nothing, and to quote Simon Upton again, “attention would be better expended ensuring that those with the necessary business skills can access and commercialise the opportunities that arise in the ordinary course of research”. In short: in R&D, the scientists should be left to the ‘R’ and the business/technology transfer experts should be left to the ‘D’

I’m not so sure our research is second rate and in my experience traveling to conferences worldwide, I know that we can definitely hold our own. Do we simply not have the volume of basic research to drive innovation? Or is it that we lack the business skills to take great ideas to scale?

I agree with Sir Peter and I think he is creating a much-needed stir in his new role. The onus now lies with Prime Minister John Key and the National Government to make good on claims like “science should be at the heart of Government”, and “RST will be expected to play a bigger part in improving our economic performance“. The recent announcements by Minister Mapp, indicate that things may at last be moving in the right direction.