The 2009 Nobel prizes were recently been announced over at http://nobelprize.org. One half of the Physics Prize has gone to Charles K. Tao of Standard Telecommunication Laboratories, Harlow, UK, and the Chinese University of Hong Kong “for groundbreaking achievements concerning the transmission of light in fibers for optical communication”. The other half was jointly awarded to Willard S. Boyle and George E. Smith of Bell Laboratories, USA, “for the invention of an imaging semiconductor circuit – the CCD sensor” which is used in digital cameras. 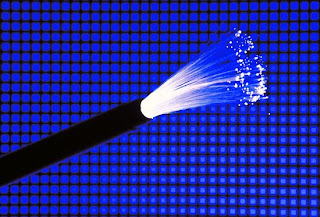 “Today optical fibers make up the circulatory system that nourishes our communication society. These low-loss glass fibers facilitate global broadband communication such as the Internet. Light flows in thin threads of glass, and it carries almost all of the telephony and data traffic in each and every direction. Text, music, images and video can be transferred around the globe in a split second.

If we were to unravel all of the glass fibers that wind around the globe, we would get a single thread over one billion kilometers long – which is enough to encircle the globe more than 25 000 times – and is increasing by thousands of kilometers every hour.”

Although the hypertext transfer protocols (http) that allows users to view data over the Internet in web browsers (the ‘world wide web’) were developed mainly by Tim Berners-Lee at CERN in Geneva, Switzerland (also home to the Large Hadron Collider), the development and laying of fibre optic cables is what has really enabled this technology to be of use to the world.

It is hard to imagine another 20th century invention that has changed the way the human race interacts with each other as much as this one. Individuals are now empowered – they are the authors of their own digital content, they can collaborate rather than compete, they find the news rather than the news finding them, and anyone can do business with anyone else in the world. As author Thomas L. Friedman rightly points out – “The World Is Flat“…