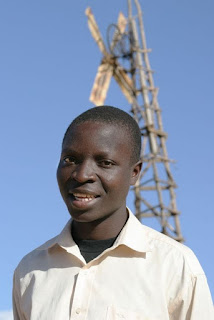 William Kamkwamba is from Malawi. At the age of 14 he was forced to abandon his schooling because his family could no longer afford to pay his tuition after struggling through one of Malawi’s worst famines. Not wanting to miss out, William followed his friends school notes, and read from his villages library. After reading a book called “Explaining Physics” where he learnt about electricity, and seeing the dynamo on his fathers friends bicycle, a photograph of a windmill in another book gave William the idea to construct a windmill for his home.
He did this using, wait for it….a broken bicycle frame, a rusted shock absorber for a shaft, a tractor fan for a rotor, ball bearings, and melted down PVC pipes for blades. He rigged it all up on a frame made of gum tree wood, fired it up, and held a glowing light bulb in his hands. Not too bad for a 14-year old boy. Since then he has made a number of improvements, including a car battery to store electricity, a circuit breaker made from nails and speaker magnets, and hand made light switches. He installed lights in all the rooms of his family’s home, and has since added a solar panel on the roof. Seeing the benefits this made to his family, he extended his know-how to his whole village, of which every home now has a solar panel and battery for energy storage. The town now has a wind-powered pump for irrigation, and a pump powered well!
His book “The Boy Who Harnessed the Wind” was one of Amazon.com’s top science books of 2009, he has spoken at many conferences, including the prestigious TED conference, has started a blog, and has recently returned to school at the African Leadership Academy in Johannesburg where he is studying with the dream of starting his own company to install windmills across Africa.
To gain this knowledge from nothing and to go from building a single windmill, to powering your whole village, to taking the first step towards creating a whole industry in your region is truly remarkable. It shows what can be achieved with some ingenuity and determination. We have that in bucket loads in this country – there is no reason why people, companies, and governments can’t do the same here.