Its been a long time between posts and now as I arrive in Europe after 4 months travelling through South East Asia and China, I find myself with a lot more time on my hands and the chance to get back into posting. The next few months will be tough and hopefully I can keep you all updated on how the dreaded job hunt and return to real life is going.

This is a little late I know, but arriving a few weeks ago and taking a quick look at my feed reader, I saw some good news. The NZ government has in its 2010 budget allocated an increase in funding to science and technology of around $320 million. Although I won’t go as far to say this is “huge” for NZ science (I agree with Colin James’ article in the DomPost), it is good, and it is a step in the right direction.
I’ve noticed plenty of comment on how there isn’t much in there for universities and so-called “blue sky” research, and that most of the benefits of this funding will go to business, which is probably correct. Looking at the graph (shown below) in the ‘Igniting Potential’ document produced by MoRST, one can see that NZ public sector investment in science is woefully low compared to OECD levels. More money would always be a good thing. 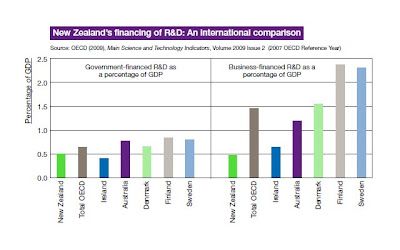 But one thing I have noticed since being in Europe and job hunting, is the presence of the large firms and how they interact with the public sector. I was at a job fair the other day and saw several presentations from large firms emphasising public-private partnerships (and in true corporate nature, the millions that were spent on them!).

NZ private sector investment in R&D is low because we don’t have much industry. We don’t have a mining industry like Australia (yet!), or the largest mobile phone manufacturer in the world like Finland, or a thriving Cleantech industry like Denmark. It is my view that we need to get our businesses to a level where they are large enough to fund such public-private partnerships, develop their own niche industries, or at least have their capabilities recognised internationally in order to attract partnerships with Multinationals (see Craig Venter + Exxon Mobil).
How do we do that? By giving businesses incentives to undertake R&D, helping them leverage the talent that already exists in our universities and CRI’s (Crown Research Institutes), assisting where the whole chain breaks down (technology transfer), and promoting ourselves internationally – which I believe is the important aspect of this new focus by the Government, and one that I am optimistic about.